How does approval automation work?

If you have people that are responsible for approving contracts generated from a certain template, you can set up rules for when and which approvals should be required.

Precisely offers two types of approvals. You can choose to not use approvals, use one, or use both for each of your templates:

Initial approval is made after a draft has been generated from an automated template but before it is sent for negotiation. The approver automatically receives a notification to approve once the project is created.

Approvers and approval rules are applied individually to each template. To add approvers, simply

Please note that only Admins and Managers of your organization can be selected as approvers.

To create rules for approval, simply

Reference lets you create a rule based on responses to questions in the drafting questionnaire. This option is suitable e.g. when you only want the approver to be added for contracts exceeding a certain value.

Contract creator lets you create a rule based on who drafts the contract. This option is suitable e.g. if you have a manager that is responsible for approving drafts created by certain people.

Team lets you create a rule based on which team the person that drafts the contract belongs to. This option is suitable e.g. if you have different approvers for different departments.

Pro tip: You can add different rules for the same approver. For instance, one manager could approve all contracts exceeding a certain value. That same manager can also be added as an approver when a certain individual drafts a contract, even if the value is lower than required for the other rule.

Note: In order for approval orders to work, Require approval by all must also be enabled.

What happens when I have activated approvals?

Once approvals are activated for a template, users generating a contract using that template won't be able to send the contract for negotiation or e-signing, depending on if initial approval, final approval, or both are activated, before it’s approved by an authorized approver (or all of them, if required).

Initial approval: When a contract is generated from the template, the approvers receive an automatic email notification. The pending approval also appears in the approver's dashboard.

Once the project has been approved, the contract(s) will be locked for further edits. The contract can now also be sent for negotiation or sent for signing unless final approval is activated for the template.

Final approval: once a contract has been negotiated and amended, it is ready for final approval. Final approval needs to be requested in the Approvals section of the project’s overview.

The approvers can then approve of the project, allowing it to be sent for signing, or deny it. When denying final approval, the request is reset and needs to be requested again once the changes have been made.

If final approval is denied, the approver can leave a note about what changes should be made, which can be found in the Notes section of the project. 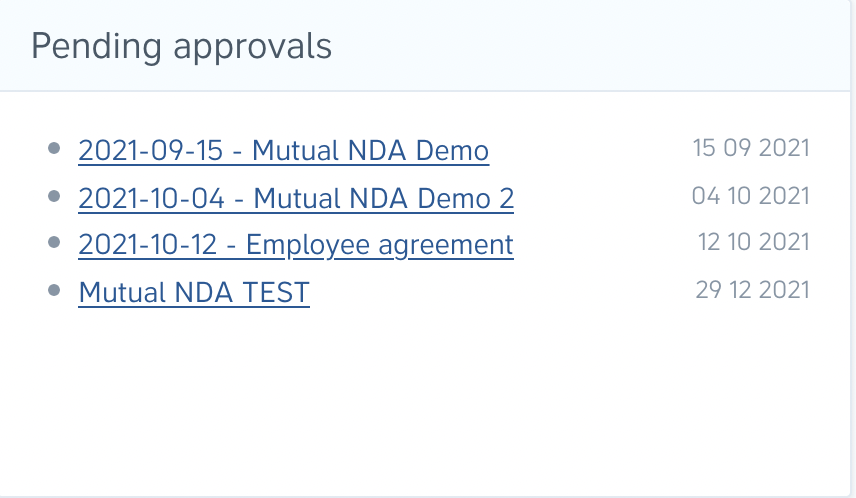 Pro tip: To further increase your control, you can decide whether users are allowed to upload and send documents for e-signing or not. You can also decide if users can upload files on their own when drafting from a template.